Hey folks! I’m migrating my reviews from thisiswickedfierce.com to Banned Bitches so they won’t be in the normal BB format. Apologies. 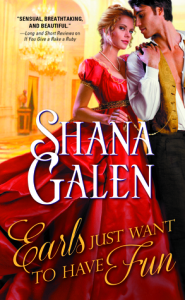 His heart may be the last thing she ever steals . . .

Marlowe is a pickpocket, a housebreaker—and a better actress than any professional on the stage. She runs with the Covent Garden Cubs, a gang of thieves living in the slums of London’s Seven Dials. It’s a fierce life, and Marlowe has a hard outer shell. But when she’s alone, she allows herself to think of a time before—a dimly remembered life when she was called Elizabeth.

Maxwell, Lord Dane, is intrigued when his brother, a hired investigator, ropes him into his investigation of the fiercely beautiful hellion. He teaches her to navigate the social morass of the ton while his brother attempts to confirm her true identity. But Marlowe will not escape so easily. Instead, Dane is drawn into her world of danger and violence, where the student becomes the teacher and love is the greatest risk of all.

Ginny’s thoughts: Shana Galen has quickly become one of my favorite historical romance authors, and Earls Just Want to Have Fun is a prime example of just why that is. Expertly written, Earls takes familiar ideas and stands them on their head. Our hero is your straight-laced titled *ahem* a-hole (sorry, but he is) who’s suffering from ennui. Our heroine is the daughter of a titled gentleman who was kidnapped as a child, raised as a thief and uses the word bubbies.

From the second she did, Marlowe earned herself a special place right in my heart.

But it wasn’t just the crass language, the perspective of a street urchin, the adversity to bathing and the over abundant hunger that won me over. It was the entire way the story was told. The way both Marlowe and Dane keep doing their best and then realizing that their best may have been a tragic mistake. The only thing that could’ve improved it would have been Hagrid reading over my shoulder and saying “he shouldn’t have done that” as the character figured it out themselves. (And to be honest, I imagined that he did.)

The way that these two characters worked against each other, then along side one another, and finally with each other was amazing. Their romance felt natural and there was only once instance where quicksilver emotions made me want to slap everyone involved. This historical comedy of errors just had perfect pacing … and enough upturned noses for an ENT convention. (Let me just look up your nose real quick … oh, it’s already turned up for me. How convenient.)

I highly recommend to anyone who enjoys historical romances.

Click here to get a copy for your Kindle today!

A review copy of this title was provided via Netgalley in exchange for a fair and honest review.