Banned Review: Generation Zero, Volume 1: We Are the Future by Fred Van Lente 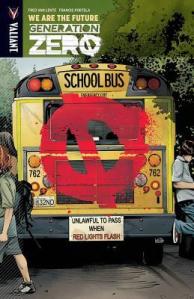 Years ago, the children of the experimental strike team known as Generation Zero were taken from their families by Project Rising Spirit, a private weapons contractor, and raised to be psychic soldiers. After years of taking orders, they have fought for and won their freedom. Now, the world s most wanted teenagers have pledged to protect each other tooth and claw, while using their extraordinary abilities to right wrongs for a generation without a future To fight for kids, just like them.

One of those kids is Keisha Sherman, whose boyfriend just turned up dead after a suspicious car crash in Rook, Michigan a newly booming tech town that sprang from rags to super-riches seemingly overnight. When Keisha makes a desperate plea into her webcam, the local high school suddenly finds itself with several unusual new students But as word of Generation Zero’s presence spreads rapidly through the halls, this volatile band of teenage upstarts is about to discover that they’re far from the most extraordinary thing lurking behind Rook’s stainless-steel facade.

Scorecard:
Recommended for:
Rating: This was pretty good. I enjoyed the majority of it excluding a few problematic points.

Rating: This was pretty good. I enjoyed the majority of it excluding a few problematic points.

Ginny Lurcock’s Thoughts: I’m really stuck on this review, so I’m going to have some tea and watch the Grinch (the original) while trying to piece together my thoughts. Enjoy this image from the comic of Keisha making smoochy-smoochy with her boyfriend, Stephen.

Okay, I’m back, and I think I’ve got my thoughts in order so let’s give this a whirl. I enjoyed a lot about this comic. If you know a lot about me, you know that rogue superheroes escaping from the government are my jam. I’ve got about thirty half finished stories featuring them. Also, high on my list of favorite settings is anything dystopian, including the setting where everything seems so advanced and perfect, but actually involves an evil government.

So, needless to say, the premise of Generation Zero is right up there for me. (The premise being that this group of superhero kids go out and protect other kids from adults who don’t have their best interests at heart who go help a girl who’s convinced her shining town is actually a festering cesspool.)

The artwork is on point here too. Keisha is amazingly well done at all times, the way her brother views the world is unique so you know it’s his POV without distracting from the story, and even when it switches styles in one volume they look amazing too. If some of the characters have less consistency in their art than others… well, I’ve come to expect that from comics. No big in my mind.

All in all, I will be reading more of the series because of the premise and the art… but I almost didn’t for two reasons.

One: Keisha’s voice is a little inconsistent.

She ends up doodling his name while spacing out thinking about him?

Now, I’m willing to admit that I’m hyper sensitive to how women are portrayed in media. I’m a vocal feminist who wears the SJW with pride. That shouldn’t diminish the fact that we should be so very careful on how we portray people. If a character’s main driving factor is to uncover the truth behind her boyfriend’s death, maybe don’t make the character seem fickle pages later by trying to introduce the potential for a romance down the line.

Two: The fuck is with the talking fetus?

When I was pregnant my mother told me about stone babies. In case you were wondering, at any given point one member of my family or another is putting their foot into their mouth. Telling a pregnant woman about the calcification of a fetus was my mom’s turn, I guess. Anyway, ever since becoming a mother I’ve been super sensitive to stories involving children and pregnancies. So I might have had an issue with the super-intelligent telepathic fetus controlling it’s catatonic mother even without the stone baby thing…

But I do know about stone babies (and now so do you, you’re welcome) so I’m just…

I had nightmares, y’all. Nightmares about stone babies controlling my body while I slept.

I may never recover.

Let’s go back to Stephen and Keisha making out…

(But if there’s more Stephen, I’ll forgive just about anything. Even a slapdash “surprise he’s not dead” scenario. Because I really liked Stephen)

Generation Zero, Volume 1: We Are the Future by Fred Van Lente will be published on February 07, 2017.

Or you can get the series now on Comixology or your favorite local comic store.