Banned Book Review: Off Base (Out of Uniform #1) by Annabeth Albert 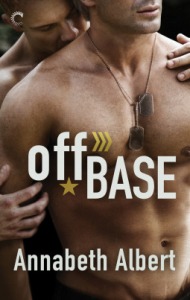 After trading the barracks for a fixer-upper rental, navy SEAL Zack Nelson wants peace, not a roommate—especially not Pike, who sees things about Zack he most wants to hide. Pike’s flirting puts virgin Zack on edge. And the questions Pike’s arrival would spark from Zack’s teammates about his own sexuality? Nope. Not going there. But Zack can’t refuse.

Pike Reynolds knows there won’t be a warm welcome in his new home. What can he say? He’s an acquired taste. But he needs this chance to get his life together. Also, teasing the uptight SEAL will be hella fun. Still, Pike has to tread carefully; he’s had his fill of tourists in the past, and he can’t risk his heart on another, not even one as hot, as built—and, okay, yeah, as adorable—as Zack.

Living with Pike crumbles Zack’s restraint and fuels his curiosity. He discovers how well they fit together in bed…in the shower…in the hallway… He needs Pike more than he could have imagined, yet he doesn’t know how to be the man Pike deserves.

Scorecard:
Recommended for: Fans of military romance and mm romance.
Rating: This was pretty great

Ginny Lurcock’s Thoughts: Pike, a statistical gaming genius, is an out and proud man dealing with a previous rejection from a closeted lover. Zack is so deep in the closet he’s even lying to himself thanks to an uber religious upbringing, parental pressure in response to a fuckup of a sibling, and a platoon that consistently makes gay jokes.

Thanks to some family drama that was dropped off by the bucket load yesterday, everything irritated me. Everything. Every second of struggle that Zack and Pike went through just tweaked me the wrong way and make me want to snarl. At one moment I actually prepared a long twitter rant on how “kissing a boy is nothing like kissing a girl” is the mm version of “you’re not like other girls.”

But no matter how much it rankled (or how heavy the outside drama got) I could not stop. I had to read more. I had to find out if Zack and Pike would be okay. Did they get their HEA? Did Pike get past his occupational woes? Did Zack face down his tormentor? Did he stop feeling pressure from his family and finally live his life for himself and not his parents expectations and without his sibling drama?

If so, could he give me pointers?

It hit really close to my queer, family drama, struggling with self-worth filled home as you can tell…

And while reading an angst ridden story should’ve been over the top yesterday, it turned out to be exactly what I needed. Like lancing a wound in my very soul, it let everything negative that was overwhelming me out in one good solid cry. With their HEA, I felt renewed. I was once again full of hope.

Off Base might be a hard read for anyone coming from a religious (or otherwise homophobic) family. It may be rough for anyone who felt like they didn’t live up to their parent’s expectations. It may be tough for anyone who simply didn’t know if the relationship they were willing to risk everything for was worth it… but god, it was so worth it.

Pike and Zack are wonderful characters, well developed and multidimensional. The side characters are outstanding. And I learned at the end that this was a spinoff of another series (the first book I already own) so happy reading to me.