I'm Mary Poppins, Y'all: A Guardians of the Galaxy Vol. 2 review

We went to see Guardians of the Galaxy Vol. 2 last night and I have opinions and/or feelings. Many of them. All of them. And while I didn’t read anything about GotG2 leading up to its launch (so my experience wouldn’t be tainted with expectations or spoilers) I feel no qualms about writing these things down.

Kind of hypocritical of me, but here we are.

First and foremost I’m going to state that this movie is both lighter and darker than the previous volume. The jokes, which flowed free like wine, were on point. They brought laughter to even the heaviest moments of the movie acting as a perfect counterbalance to the heavier and darker aspects of the movie.

See, in the first installment of this franchise, the only real death we’re faced with is that of Denarian Saal, played by Peter Serafinowicz. It served as the emotional focal point of the scene and stood for all other Nova Corps pilots sacrificing their life to keep their world safe.

But I still haven’t forgiven James Gunn for it. Because… Peter Serafinowicz.

The rest of the deaths we see are mainly robots or Necrons, who’s name implies that they are not real and living beings. In fact, they seem more like husks than actual people.

This has long been a method used in storytelling. Make the bad guys monstrous or in some other way no human so that it’s okay to kill them. It is okay to cheer when they die.

You’re not the monster, they were.

GotG2 does not use this clever tool. Which in some ways is so bold I cannot help but admire it. In other ways, though… In other ways, I’m left staring in awe as Yondu uses his magic arrow (that trails red light) to slaughter his very human enemies.

It was bold. It was brutal. It was pretty as fuck. And it left me looking at my six-year-old daughter (who we brought with us because she is a Guardian SUPER FAN) and wondering if we should’ve left her at home.

I still haven’t decided if it was too violent or not… but what I do know for sure is that I was left with a squirming and uncomfortable feeling in my belly.

Wait, before you close this tab and leave in a huff… hear me out. Quill spends most of his time being the hero we need. He’s a cheeky nerd who doesn’t fit in and everyone hates him while also loving him. He is every nerd’s fantasy. Odd but badass and with a group of friend’s that will back him in any play. Or maybe that’s just me…

That’s what makes his low point even more upsetting.

(This is not so much a spoiler, as it was in the previews, but I’m going to tag it as a spoiler anyway. Skip this next bit if you need/want to.)

That’s fucking harassment. That’s Walowitz early Big Bang level harassment. It’s dudebro behavior of the worst sort and it needs to be viewed as okay, much less as admirable. That kind of shit gets women killed.

So Quill being twelve percent asshole (and so what if it’s less than thirteen percent?) leaves an opening in the film. Wanted: A character who’s story line will call to my soul and bind me irrevocably to their life. Every other character in the movie leapt at the chance to fill that void, but it was Rocket (and Yondu) that I ended up bound to.

Rocket and Yondu share an emotional arc in the film. They’re both unapologetic assholes unused to having real friends. When they do, their assholery ends up pushing those people away. The recovery from this, their evolution and growth, makes them easily the most human characters in the movie.

Well, yes, I know, I said Rocket and Yondu and then skimmed over Yondu. I wanted to go more in depth into how someone who we know was involved in the human trafficking of Quill could redeem himself… but there be spoilers so I can’t give Yondu the focus he deserves. Just know that his pain radiates off the screen from his very first scene in the film to his last. Nothing can be done in any subsequent film to undo what Gunn, Nicole Perlman, and Michael Rooker did over the course of these two films.

Despite the fact that Michael Rooker was Merle in The Walking Dead and the douchey dad in Mallrats. How is it possible that this man who I have nothing but negative emotions tied to made me feel feelings?

Well, it ties into that one review headline I was unable to avoid. Blah blah blah… we don’t want emotions in our superhero movies.

Okay, dudebro, I’m very sorry that you have to come to terms with the fact that real humans have emotions. I’m sorry that Gunn and Perlman don’t share your feelings (*snort* see what I did there?) I’m sorry that…

It’s so important that movies have emotions. All movies. Even blockbuster popcorn summer action flicks. we’re spent so long telling people it isn’t okay to feel. That it’s weak to have and show emotions. That shit isn’t healthy. It’s just not.

And if you think that superhero movies get a pass, you’re wrong. Superheroes serve a purpose in our lives, and one of those purposes is to serve as a mirror, reflecting the best and worst of us while showing us what we can be.

Now I want to go in depth on how much it meant that this character who was portrayed as being tiny and fragile, delicate almost, played such a pivotal role in the film. I want to, but I can’t. Because of spoilers. Just know that if GotG2 was a video game, Mantis would be classed as a support character.

You know, the ones you need to finish your quest that get none of the glory?

As someone who has played a metric ass ton of these characters, I squealed in delight as she kicked major ass. Even if it wasn’t overt enough for most people to notice how critical it was to the Guardian’s success.

I just realized it was going to be overlooked again and was brought to a crushing low. And well, that’s Mantis in a nutshell. All the feelings, all the time.

A more obvious role she plays in the film is to provide insight into Drax. We get more Drax in general in this edition to the franchise, and he’s hilarious every time he opens his mouth. Especially when he’s interacting with Mantis. He is such an unintentional asshole, it’s absurd.

And he is so fucking happy about being absurd. It’s…

Okay, I cannot say absurd again, but it is. Absurd and wonderful. He sort of steals the show when it comes to snappy one liners and laugh out loud moments. If it wasn’t for Baby Groot, he’d be the sleeper hit of the movie.

But there was Baby Groot, and oh my god, Baby Groot. I need a set of YA prose books about Groot growing up right now. Eleven volumes. I’ll preorder them in hardcover and their limited edition collectors set that is carved from wood with careful branches and flowers. $1,000. Right now. Shut up and take my money.

Also, someone make me a Baby Groot stuffed animal.

No, scratch that, someone make a wish so that Baby Groot is real and I can snuggle him… Like all the Guardians get to. Because he’s the team’s baby and they treat him as such. 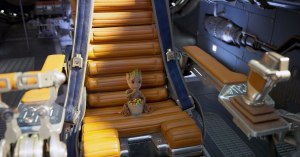 Our hardass assassin has been sharpened to an even finer edge. Which works, because I feel like we got a lot less Gamora that we did last time around. Makes sense, as other characters get more screentime it has to come from somewhere.

What screentime we do share with Gamora though has her being the same putout, quick witted, shark of the Guardians. The mother and bruiser all in one. The one you can rely on to cut your enemies to ribbons (with an eye roll in your direction) or to pop out at a critical moment and call you an idiot (while making that “watching you” gesture)

Listen, I want to be Gamora when I grow up.

And I’m going to ignore all the sister drama she shared with Nebula because I sort of am Gamora… I know I should get into it. It’s important. One of the major points of the movie is how sometimes your family is shit or absent and you have to make your own. A concept I’m a fan of. Something I’ve actually done myself. But a dysfunctional relationship with your sibling that you failed is not something I can get into right now.

Just know that Nebula has all the character growth. All of it. So much that by the end you just want to hug her and offer to braid her hair. But don’t, because she’s bald…

And can kill you…

So there you have it. My rambling review. A movie packed full of personal growth, family drama, life lessons, laughter, tears, and so many stunning visuals I could die. A movie I wholeheartedly recommend.

As does my daughter and her teddy bear. In fact, when asked, they both told me that their favorite part was “all of it.” Which is obviously bullshit, because the best part was clearly the first post credit scene. The one that is actually before the credits but after the movie ends, featuring Kraglin and the arrow.

See you at the movies,
Ginny

P.S. you’ll hear the music isn’t as good as in the first one, and that’s true. I mean, they’re still good songs and fit well in the film, but they’re not as good and don’t fit as well. It’s the trade off you get, I guess, for having so much more character development wise.

Like what I’m doing here? Consider supporting me on Patreon or by buying me a ko-fi