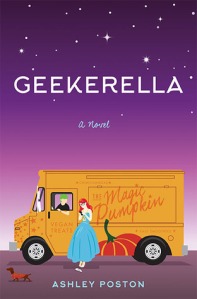 Anything can happen once upon a con…

When geek girl Elle Wittimer sees a cosplay contest sponsored by the producers of Starfield, she has to enter. First prize is an invitation to the ExcelsiCon Cosplay Ball and a meet-and-greet with the actor slated to play Federation Prince Carmindor in the reboot. Elle’s been scraping together tips from her gig at the Magic Pumpkin food truck behind her stepmother’s back, and winning this contest could be her ticket out once and for all—not to mention a fangirl’s dream come true.

Teen actor Darien Freeman is less than thrilled about this year’s ExcelsiCon. He used to live for conventions, but now they’re nothing but jaw-aching photo sessions and awkward meet-and-greets. Playing Federation Prince Carmindor is all he’s ever wanted, but the diehard Starfield fandom has already dismissed him as just another heartthrob. As ExcelsiCon draws near, closet nerd Darien feels more and more like a fake—until he meets a girl who shows him otherwise.

Scorecard:
Recommended for: Geeks, fangirls, and anyone who needs a pick me up
Rating: This was fantastic. Highly recommended.

Ginny Lurcock’s Thoughts: It’s taken me longer than it should have to post this review. Mainly because I had a review and then closed it without saving. It’s a painful memory that I am still trying to recover from.

The review below is my second effort, and probably inferior, but … well…. it was a fuck awesome book and I just couldn’t go without posting one.

Without further adieu, I present your review.

I’ve been burned by fairytale retellings before. Many times. All the times. I don’t even know why I pick them up anymore. Until I stumble across something like Geekerella and my faith in retellings is restored.

Actually, restored isn’t even the right word. This story is so adorable the bar has been permanently raised. This is now the book that all geeky retellings and/or Cinderella retellings will be compared to. Take note, retellings world. This is your new benchmark.

From the moment we’re introduced to Elle and the science fiction world she fell in love with, I was enamored. More than a little because it felt strongly like the show that Galaxy Quest was based on. Campy, but with a strong fanbase. Less of a revolving door of love interests than Original Star Trek. More like the original Battle Star Galactica.

And oh my god, do you see how long I’ve spent analyzing the fictional universe that is central to this novel? That’s how good this novel is. I was so easily wrapped up in the fictional fandom, that I want this 70s show and reboot to exist in real life so I can analyze it.

Yeah, no… I suggested that to my lawyers and they said that geeking out over a fictional fictional universe isn’t enough for a review…

In Geekerella you can feel the pain Elle experiences as she watches her fandom slip away from her. Another thing that was stolen by her step-sisters and the teen heartthrob they love. We feel the pain of the heartthrob struggling to be himself while people call him a fraud. We see them reach for one another, seeking solace without realizing they are the same people they need refuge from.

Add in a pumpkin themed vegan food truck, a lesbian best friend, and cosplay and I just want more. I want all of it. I want to wrap myself up in this retelling forever.

If you enjoy fairy tale retellings, general geekery, fandom, or cute and angsty tales, please give this a shot.

You will not be disappointed.