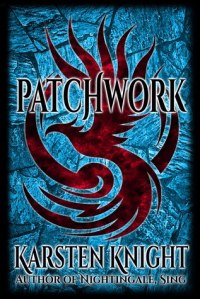 Before I Fall meets Inception in this time-bending YA mystery from the author of Nightingale, Sing.

“My last thought before the black seas consume me is to wonder what morbid twist of fate allowed a prom, a proposal, an act of terrorism, and the deaths of everyone I know to converge on the same night.”

Renata Lake thought her relationship would be the only casualty of prom. Then the bomb went off.

It was supposed to be a night to remember—a cruise through Boston Harbor, dancing beneath the stars. But when an explosion tears the ship apart, Renata wakes up in Patchwork, an ethereal world where all her memories have been stitched haphazardly together.

In order to catch the assassin who murdered her friends, she’ll have to navigate the twisted landscape of her mind and relive critical moments from her past in search of clues. Can she uncover the killer’s identity and find her way back to the man she once loved before it’s too late?

Don’t miss the twist ending of this dark, modern-day reimagining of the phoenix myth that will thrill fans of Passenger and A Thousand Pieces of You.

The Meta Details:
Source: Netgalley
Format: eBook
Length: 308 pages
Publication Date: February 28, 2017
Genre: Fantasy, Thriller
Content Level: Young Adult
Pearl Clutching Content: allusions to: underage sex, cheating, teacher-student affair, and the repeated murder of children
Trigger Warnings: dead parent, murder, lots of murder, of teenagers, cheating, more murder
Featuring: Did I mention the murder? Also, a smattering of characters that are so wholly unlikeable at the beginning I cannot understand how I routed for them by the end.

Scorecard:
Recommended for: folks willing to stick around for the slow burn.
Rating: This was great

Ginny Lurcock’s Thoughts: I have a “flawless” system for my Netgalley ARCs. I request a bunch of stuff, basically on a whim, and then start reading based on the publication date and the platform I have it on. Prose in protected PDF that can be viewed in a small Adobe Editions window can be read on my breaks at work… and that’s usually when I pick up new books.

Now, this is where my flawless system earns its quotes… because I end up picking up books, reading two pages and then going “what the fuck am I reading?”

That’s what I did with Patched. Even more disturbing was when I read the blurb and realized I selected this book specifically for the cover. There’s no other explanation for it because I avoid any book that has the word terrorism in it like it’s going out of style.

That is a minefield my white ass stays way the fuck away from.

But I requested the book, so I had to at least give it a fair shake. I started reading and prayed for it to be problematic quickly so I could chuck it.

Except that as the pages went on, it didn’t become problematic. Sure, the characters were all assholes I wanted to shut up- preferably somewhere in another time zone- but they weren’t problematic. Just real people. Teenagers, at that, who I am notorious for disliking.

(People, that is. Especially the teenage ones. Hell, I almost cold clocked one at the mall yesterday because of their air of casual assholery that can only be obtained by a teenager who thinks they’re invincible.)

As the book progressed, I actually found myself liking the characters. Rooting for them to figure things out and come out on top. Even though Renata was the only one moving forward while everyone else moved backward.

Which sounds insane, I know, but it’s somehow woven together here expertly and makes a goddamned entertaining story. If you stick with it anyway, as it is kind of a slow burn. (There were sections towards the beginning I just kind of skimmed… but keep that between us, okay?)