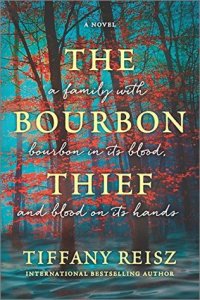 When Cooper McQueen wakes up from a night with a beautiful stranger, it’s to discover he’s been robbed. The only item stolen—a million-dollar bottle of bourbon. The thief, a mysterious woman named Paris, claims the bottle is rightfully hers. After all, the label itself says it’s property of the Maddox family who owned and operated Red Thread Bourbon distillery since the last days of the Civil War until the company went out of business for reasons no one knows… No one except Paris.

In the small hours of a Louisville morning, Paris unspools the lurid tale of Tamara Maddox, heiress to the distillery that became an empire. But the family tree is rooted in tainted soil and has borne rotten fruit. Theirs is a legacy of wealth and power, but also of lies, secrets and sins of omission. The Maddoxes have bourbon in their blood—and blood in their bourbon. Why Paris wants the bottle of Red Thread remains a secret until the truth of her identity is at last revealed, and the century-old vengeance Tamara vowed against her family can finally be completed.

The Meta Details:
Source: Library
Format: Paperback
Length: 379 pages
Publication Date: June 28, 2016
Genre: Revenge. Is that a genre? It should be. This is like 1001 Nights except its only one night and one story and there’s revenge at the end.
Content Level: Adult
Pearl Clutching Content: Anything by Tiffany Reisz is gonna be looked down on by the literaty… but it’s okay because she wants to be banned. (And a shame, because her prose is exquisite)
Trigger Warnings: Graphic sex, underage sex, incest, rape, attempted rape, blackmail, racism, sexism, homophobia
Featuring: a web of characters who are neither good or bad save three truly evil men and one evil woman who led Paris (the most epic woman ever) to steal a bottle of bourbon.

Scorecard:
Recommended for: Everyone. Read this book.
Rating: Must read.

Ginny Lurcock’s Thoughts: I hadn’t considered picking this book up while wondering if I could still enjoy things as a feminist killjoy. It’s not even normally the kind of book I like. I don’t handle angst well. It’s something to do with my anxiety or naivety or my empathy… I don’t know. I just know that normally this type of thing gives me hives.

But The Red was epic and not normally the type of thing I read. And I was already depressed. And Ginny loves Tiffany Reisz. And I was going to have to return it to the library before vacation.

It was mainly that last fact, in case you were wondering.

So I picked it up and read. For four hours straight. I devoured this book like a baron downing a bottle of bourbon. It has everything that I just posted I hate in books. Abuse of children, incest, racism, slavery, rape, homophobia. Evil powerful white men. Revenge. And bourbon.

And fuck my life was it good.

It never used any of these horrific plot elements for titillation. That was the difference. They weren’t convenient plot points. They were used to weave together this wonderful horrible story with people overcoming evil deeds done by evil man.

So many evil men.

In the end, you’re not gasping in pleasure, but struggling to breathe around the fire that’s burned out your lungs. That’s immolated everything evil and impure within you leaving you empty. Ms. Resiz’s prose is so magnificent that it’s art at an entirely different level. Turning something abhorrent into something magical.

I know understand this quote in ways I never could have before, Ms. Reisz, and it’s all because of you.

Art should comfort the disturbed and disturb the comfortable.

After reading the Bourbon Theif I am highly disturbed… but I’m comfortable with it.