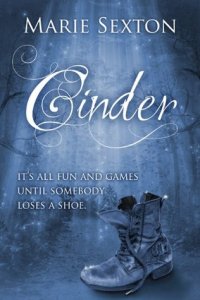 Eldon Cinder would give anything to see Prince Xavier one last time, but only women are invited to the royal ball. When the local witch offers to make Eldon female for just one night, he agrees.

What could possibly go wrong?

This story also available in print in the anthology Ever After: The Collected Short Works of Marie Sexton.

Did I mention gay fairy tales?

Scorecard:
Recommended for: Fans of fairy tales
Rating: Must read (unless it’s triggering)

Ginny Lurcock’s Thoughts: Normally I avoid angst. I just said that, didn’t I? But while reading fanfiction I learned that there’s something to be said for romances that are so full of pain that they make you bleed. And when I need to cry, when all my emotions are tangled up and straining to get free… these books are like my miracle cure. It’s easier to cry over someone else’s pain than to admit your own, after all. And one good cry is as good as another.

Plus it makes the happily ever after that much sweeter.

Cinder brings that kind of pain. That kind of hopelessness. The knowledge that no matter what, your love can never be. And struggling against a heteronormative society is so fucking crushing. It’s exhausting. But Marie Sexton weaves this narrative (full of hopeless love and pain) in such a way that you can’t help but be enraptured.

It’s sweet and light while being heavy and dark. Playfulness and magic and truly awful families. Impossible situations and settling to just be near someone and…

And it somehow finds a way for it to all work out in the end.

I had promised myself I’d stay away from fairy tale rewrites for a bit, but I’m glad I broke that promise. It was lovely, both bur and balm to my battered heart. The ending filled me with such joy and hope… but I’m a queer woman in my thirties married to a man. So I would caution that this could be triggering to anyone who struggled with coming out or hopeless crushes on people not interested in you because of your gender.