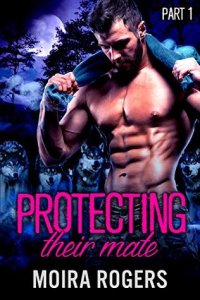 Part One (of Three)

Blake is on a mission from his alpha–to track down a werewolf whose parents dragged her into the human world years ago, one who may be in danger. He expects the lead to go nowhere, given how few wolves live among humans, but he discovers something rare indeed, caged in a basement: a beautiful, curvy woman gripped by the fever, ready to mate.

Ashley Todd has never fit in. She’s always been too much–too big, too demanding, too aware of the wolf hiding beneath her skin. She’s been locked away for months—been alone for a lifetime—and in walks Blake to save her from her prison. Her rescuer is hard, intense—a dominant wolf whose bossy attitude makes her growl…and yearn to submit.

Soothing Ashley’s mating fever is Blake’s responsibility–and his pleasure. Their passion is explosive, undeniable. But what started out as a job for Blake quickly becomes something more, and the toughest part of his mission looms: taking Ashley back to his pack so she can choose her permanent mate from amongst his brethren.

Ashley is drawn to dominant Blake, but meeting the rest of the pack reignites her desire. She is overwhelmed by her new life and all it entails, but embracing her inner wolf means embracing the truth: if she doesn’t explore her attraction to the other members of the pack, she’ll never find her forever mate.

Scorecard:
Recommended for: fans of Kit Rocha, Moira Rogers, smut, paranormal smut, people looking to get into smut, and Teamsters.
Rating: Must read

Ginny Lurcock’s Thoughts: It was difficult for me to get into this title at first. Ashley’s captivity and then the nature of wolves made it hard not to be squeaked… but then I realized that it’s kind of like Beyond Shame, but with werewolves and as soon as that clicked I was on board.

When writing either as Moira Rogers or Kit Rocha, this dynamic duo has the ability to pack a lot of character development, plot development, and explicit, kinky sex into very few pages. The narrative is precise, getting to the point while throwing in humor and naughtiness.

It’s a talent very few people have, and it’s something to be cherished.

The chemistry between Blake and Ashley is palpable. At one point, I had to put down my phone because it had physically overheated. Sure, that could’ve been the fact that it’s old as fuck and it does that when I read, but it was probably the connection between these two.

They challenge each other, and within a day of meeting they’re bringing out each other’s best selves. Even during their moments of dubious consent and overbearing protectiveness.

It was sweet, it was touching, it was steamy. Everything that you need in 60 pages, leaving you wanting more without an evil cliffhanger.

Well done, Rogers. I can’t wait to read the second one. (And will start as soon as I finish this review because I didn’t want to confuse plot points)