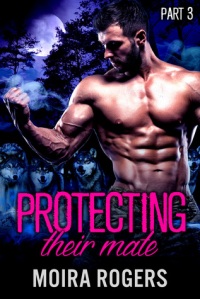 As Ashley settles in to her life at the lodge, she meets more of her new pack mates–including wicked, intense Jud. His touch arouses her hunger–and Blake’s possessiveness. Lucas, the unyielding alpha, grows concerned with the attachment between Blake and Ashley and sends Blake out on a mission.

While Blake is away, Ashley meets the most elusive member of her new pack—the enigmatic Connor, a hacker who, like her, was raised among humans. For Connor, sex is volatile—dangerous—and being near Ashley draws out the feral edge of the wolf inside him. As Ashley’s connection with Blake–and with Lucas—grows deeper, an outside force threatens the peace of the Last River pack.

Wait… not that last one…

Scorecard:
Recommended for: fans of Kit Rocha, Moira Rogers, smut, paranormal smut, people looking to get into smut, and grandmothers.
Rating: Must read

Ginny Lurcock’s Thoughts: I love stories told in short snippets, the way this was originally written. It allows for one cohesive over arcing story to be told via smaller stories that have their own beginning, middle, and end. In many ways, three short books are more satisfying for me than one long book.

And Moira Rogers’s Protecting Their Mate is the perfect example of why this works. All three pieces are solid stories in their own right and tell the story of Blake and Ashley as well as introducing us to The Last Pack. It’s wonderful, and this last installment was the best of the series.

With less sex than the others, it was no less intense. In fact, it was even more intense because it had less sex. There was more at stake, the longer Ashley spent with the pack without taking a mate. Having another pack in their territory. Attempting to save the abused girl.

Even fighting what I assumed was a lone wolf for good measure.

…I should tell you, I think I enjoy Rogers’s fight scenes better than their fuck scenes…

But that’s not the point. The climax (pun intended) of Blake and Ashley’s story pays off while giving us another look into pack life and setting up Connor and Mac’s story. And god, I need Connor’s story.

And he needs a cuddle…

I’ll be waiting impatiently until Defending Their Mate is released later this year to see if he gets the snuggles he desperately deserves.