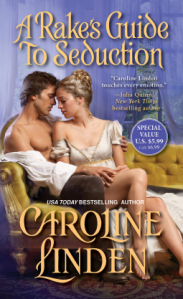 Anthony Hamilton is the most scandalous man in London, a gambler, a fortune hunter, an infamous rake. Celia Reece is sure he’s never had one thought of her, except as his friend David’s younger sister. Who would ever guess she’s the only woman he’s ever loved—and can never have…

(could they have spared a few more words for the blurb? this is gonna mess up my formatting)

Ginny Lurcock’s Thoughts: Oh god, I have feelings. So many feelings. Because this was not what I expected at all. It didn’t fall into the formula I have in my brain for a historical.

And it was all the more glorious because of it.

(I know, I was just preaching about following the formula for romance and not just being avant-garde for the sake of it. That doesn’t apply when it’s done well, though, and this was done well.)

The novel starts off in the standard historical fashion. Young woman trying to attract the attention of a scoundrel. Only as soon as she gets it… she’s decided to marry someone else.

I assumed this meant he was going to fight for her, but instead she goes ahead and marries the other man and we get this journal of the trials and tribulations of her marriage until her first husband’s untimely death and her subsequent self-doubt and depression.

(And I would call that a spoiler, but it’s a historical romance between Celia and Anthony… you know she didn’t get divorced…)

It was hard to read in places. I was emotionally wrecked by the journal. Because of this, though, the payoff was so much sweeter. By the time Anthony and Celia’s romance started in earnest, I was tickled pink. When the library scene happens halfway through the book I did an embarrassing dance.

And even though things still didn’t proceed as I expected from that point until the end, it was better than I could have imagined. The connection was real, the characters were so well crafted and with depth. The plot was fast paced and packed an emotional punch. In short, it was probably the best historical I’ve read all year.