Banned Review: The Duke of Danger (The Untouchables #6) by Darcy Burke 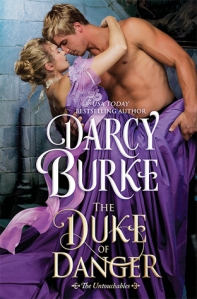 After killing his opponent in a duel, Lionel Maitland, Marquess of Axbridge, is known as the Duke of Danger. Tortured by guilt, he shields himself with a devil-may-care attitude. However, when he kills another man in another duel, he’s beyond redemption, even though it wasn’t his fault. He refuses to smear a dead man’s name, especially when he’s left behind a blameless widow who doesn’t deserve an even bigger scandal.

Widowed and destitute, Lady Emmaline Townsend must marry the man of her parents’ choosing or beg unsympathetic relatives for support. The only way out is to ask for help from the one man she’s sworn to hate, the man who owes her anything she asks, the man who killed her husband. They strike a devil’s bargain in which passion simmers just beneath the surface. But her dead husband’s transgressions come back to haunt them and threaten their chance at love.

Scorecard:
Recommended for: fans of historicals who don’t mind the nickname duke being applied to Earls
Rating: I wasn’t sure at first and had to write the review to work it out but hey look at that it’s four stars.

Ginny Lurcock’s Thoughts: I actually have no idea how to rate this book… so basically I’m writing this review in hopes that it becomes clear. Buckle up, kids, it’s gonna be a bumpy ride.

So this was my first book by Darcy Burke and it’s the sixth in a series so obviously the best place to jump into things. But while I didn’t know all the players, necessarily, it was easy to pick up the game. Emmaline married in haste and had begun to regret in leisure. Due to this, she made a bad call and felt subsequent guilt over it when her husband died after a duel. Instead of dealing with this pain, she turned it into rage and hatred for Lionel.

Fast forward eight months and we see Emmaline desperate to avoid another catastrophic marriage and calling in the “I’ll do anything” that Lionel had offered. Allowing her to mistreat Lionel because of his guilt. And no one can talk me out of this opinion. She trapped him in a marriage he did not want that was doomed to be loveless and childless as well as a life of celibacy because he felt he deserved no better.

Basically, every character in the book was a manipulative asshole with the exception of Lionel and the folks who had their own books previously. (The Suttons and the Wests and that’s basically it.)

That’s not to say Lionel wasn’t a pain in my ass. Listen, there’s honor and then there is not being a pig-headed asswipe who breaks his vow to his (admittedly shitty at the beginning and markedly less shitty by this point) wife. He’s like fucking Ned Stark. Let me just wander around like a bull in a china shop in the name of fucking honor because I’m a colossal fucking asshole.

…clearly, I have a lot of feelings about the characters included in this book. Probably because I actually really liked them all quite a bit. I mean, yes I loathed some of them (looking at you, Marianne) but they all had a part in this narrative, and they played it to perfection.

Even Emmaline being a shitty person and slowly realizing that she was wrong. I mean, watching her work through her guilt and grief with the least appropriate person was just astounding.

Long story short, I really enjoyed the book. Even when I was unsure why or how to rate the book, I knew I liked it. And it’s safe to say I’ll be checking out Burke’s other works (*gigglesnort* that rhymed) because of it.