Previously on Fangirl Follow Along I exposed the seedy underbelly of the demon bus cul-de-sac offering up the abs of seventeen-year-old trainees to the great god of KPop in No More Dream.

Today, we view a different video for the same exact song! (KPop is weird, yo.)

It’s my first time viewing the video, and I’ve got to admit I’m pretty excited for what’s gonna happen. So let’s just jump right in with both feet, yeah?

So in this version, we lose a lot of the extras like occasional bouts of property destruction and focus on the choreography. If you’re aware of KPop at all, you know this is serious business. I get winded just watching the dance practice videos they post. It’s a big deal. Seven people moving around and in compliment to each other while singing or rapping.

Something that can get lost in a regular music video. Hence the feature of dance versions in Kpop culture, I guess.

Like usual, we start with the Big Hit logo.

And get right to the boys posing like hooligans. One hundred percent less doom bus and I’m already pumped.

Except then V yawns or picks his nose or something and– Wait. Does that say “Bad Boyz” in graffiti next to Jungkook’s head? Oh my god, it totally does. I never noticed that in the other version and I happier now than I’ve been in years. Real quick can I just apologize? This is not in HD so all the screencaps are likely to be shit. But needs must so we won’t dwell… 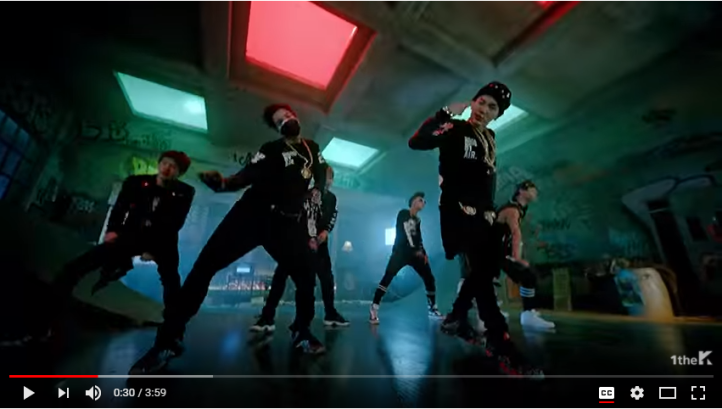 Alright, so I want to mention that when watching any of the videos I find that I rewatch them several times just to get a sense of all the member’s movements. There are seven unique and wonderful smoosh’ems in BTS so you can focus on the big picture, the person being featured at the moment, or one individual member. Obviously, this is easier with repeated viewing.

But even if you don’t rewatch the videos ten times just to watch everyone and everything (and if you’re not ARMY yet I don’t expect you to) rewatch it at least once while keeping an eye on JHope. The man (barely, again he’s nineteen here) is an incredibly talented dancer. His lines are basically flawless at all times.

I will never get a good shot of Suga saying “big rings” ever. I’m cursed. But the rest of the group is doing some sort of muscle man pose and I find I care a lot less. 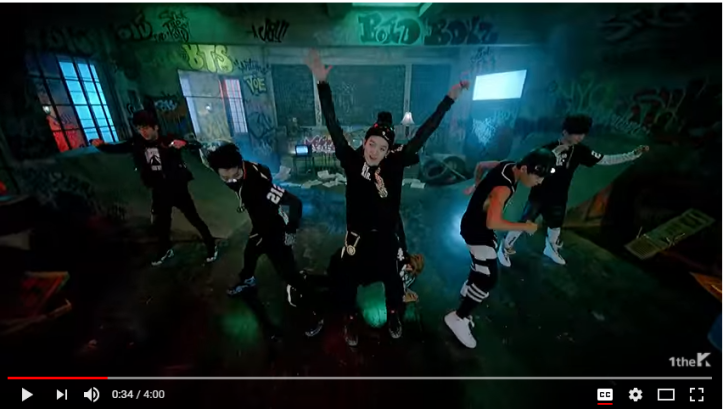 And we’re about to sit on V again. 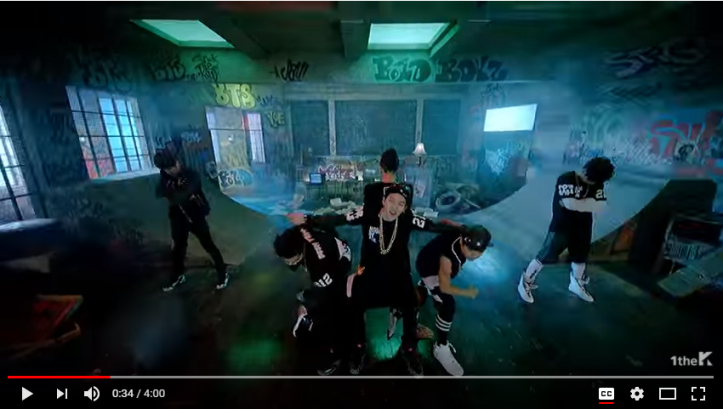 There we go. V on all fours. Suga on his back. Jimin on his head. Jin looking on from the side like “are we sure about this?”

(Probably where he earned his reputation of being the group mom…) 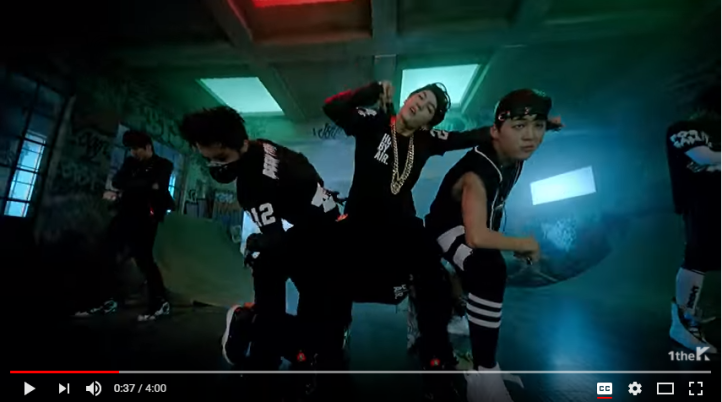 I don’t know what BTS gets paid. Honestly, what KPop stars make is one of the world’s greatest mysteries right up there with “why do kids hate naps so much” and “where the fuck did my sock go?”

But I can tell you they were not paying V enough. 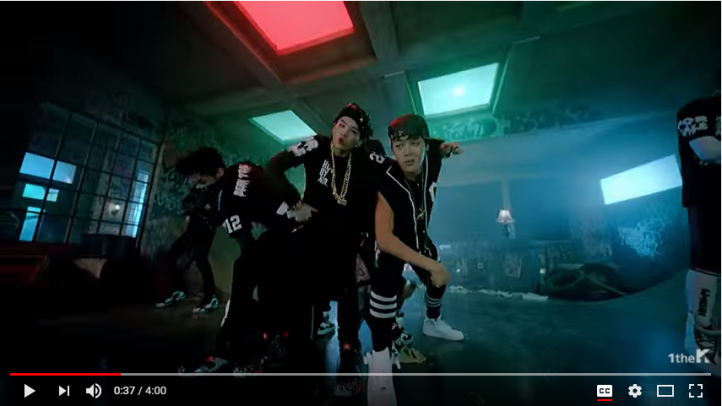 Unless they shot this scene first (and in one take) there is no way V was not in a swampy situation here. 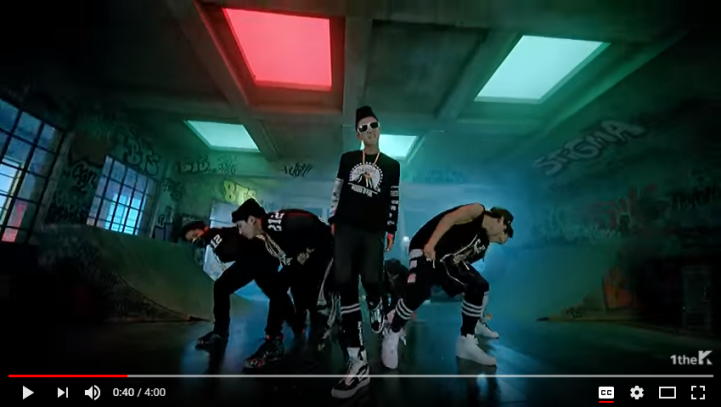 But it’s okay because he gets to squat in the background while everyone else gets pushed out of the way by RM to take center stage.

Actually, I feel worse and worse for V as this video progresses. Watch as my bias grows… Bam, out of nowhere (the side) it’s my hope, it’s your hope, it’s JHope! You know, the other completely underutilized member of the band in this video.

Wait… does that say “Bold Boyz” instead of “Bad Boyz”? I don’t even know how to handle that.

Hold on a tick. Just to remind you, last week I told you about the Pavlovian response to the Big Hit intro. Well, my child just stomped downstairs from her room, where she was playing with the closed door to throw a fit because I was watching BTS without her. I wanted to take a picture of her to include here, but there was screaming.

She’s a mit bit overtired because for some fucking reason, kids hate naps.

Back to the video… As we jump into the “see me” shimmy, I want to point out something important here. The subtitles are off. Be advised that learning Korean via subtitled KPop videos is clearly unreliable. Use Duolingo instead.

FYI it looks like their shirts say “for sale” on the arms in something akin to Double Feature font. You know, in case you wanted to make your own No More Dream costume.

Not that I would… okay, I totally would.

Remember this moment, folks, when our little Jiminnie was still pure. Ish. Pure-ish.

Oh god, it’s the Demon Bus in the Hellberhood. Why do bad things happen to good people? I’m an anti* because of this fucking bus. It’s official. Someone start me an anti-fansite. 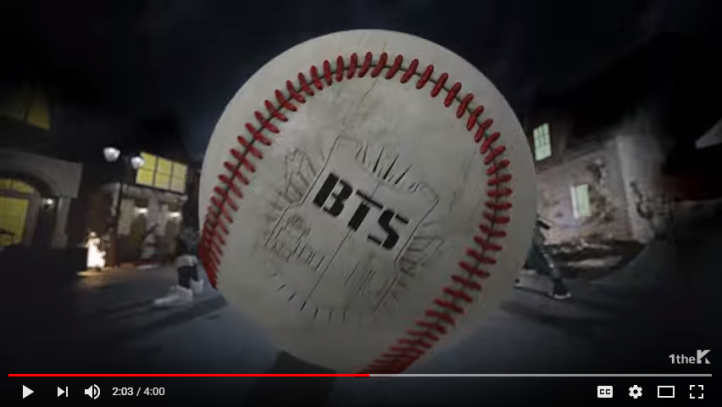 Okay, now I’m confused. Apparently, the Live Action 3D baseball is also part of the choreography. Excuse me for a moment while I open the dance practice video to verify… HOLY SHIT I FORGOT JHOPE WORE A SHIRT THAT SAID FUKK IN THIS. EXCUSE ME FOR LIKE TEN MINUTES WHILE I DIE FROM THE GIGGLES.

Well fuck me sideways… it really is part of the choreography. 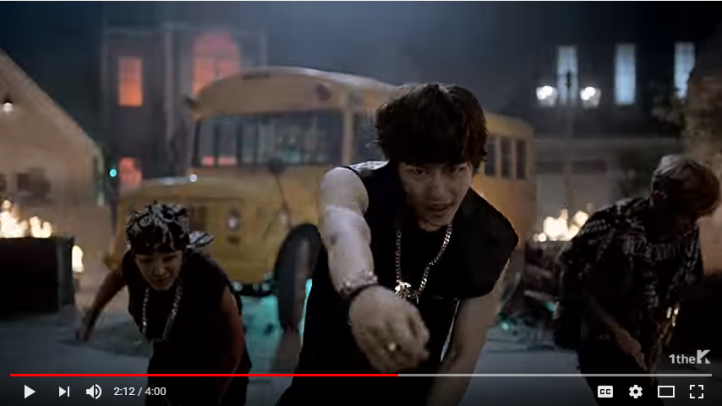 We’re now at the point in the video where I spend too long trying to find a good shot of Jin so I can avoid the impending doom… The timing is ingrained in my brain and I feel a sinking feeling in my tum-tum. 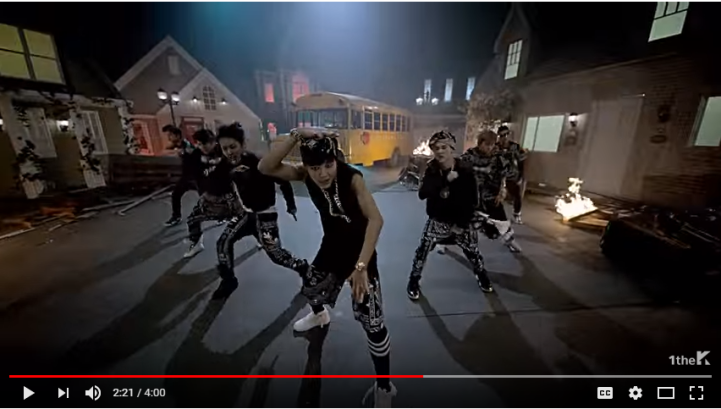 …apparently, be distracted by JHope fixing his mask which I just noticed in this screenshot. The one I had grabbed to be part of my mental breakdown I was planning for because I knew the ab grab was coming up. (Based on the last video.) But now… now I’m thinking back to when I recommended rewatching this video just to watch JHope dance because he’s (normally) poetry in motion.

I had to take a moment to heed my own advice and rewatch just for him only to discover that he spends probably half this video dicking around with his mask. He spends so much time having to pull it up and push it down that I can only surmise that whoever their stylist is must have really disliked him at this point in the game.

I need a break to handle this betrayal. I’m going to go watch cute animal videos.

That’s better. Now I can get back to the breakdown I planned to have before it was preempted by a different and totally unplanned breakdown. Rude.

Tell RM no one can take him seriously as a thug when he has dimples for days. 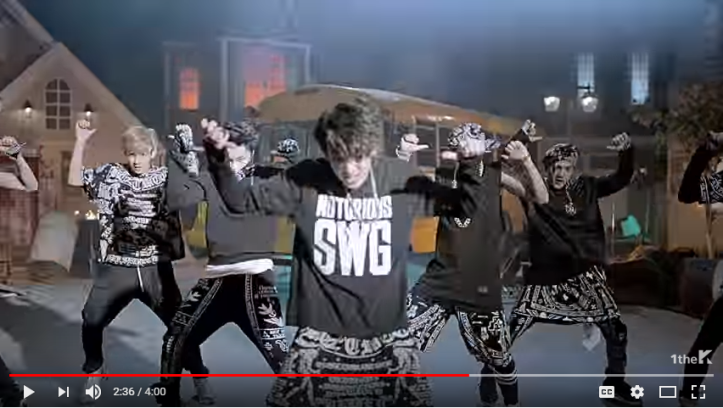 And there’s the ab grab. Oh god, this still feels wrong. I mean, mad props kid for working out and being proud of your body but… This feels like the time my friend told me her hot son was hooking up and I visibly recoiled because hot or not I think of him as a little brother.

Is Jungkook wearing hammer pants? At fifteen. So I can’t insinuate any reason for said hammer pants.

Though I can’t say if I prefer that or the “hood by air” shirts that have HBA across the ass and “been trill” (I think?) across the shoulders. There are so many questions revolving around their wardrobe choices here. Yet somehow despite my repeatedly asking my monitor for an explanation, none were forthcoming.

Thanks for your understanding, Wes.

Meaning I never have to see the BTS Bus again.

Join me next week when I share with you a special Christmas surprise! (I’m so excited!!)

No More Dream (dance version) by BTS
Released: June 14th, 2013
Album: 2 Cool 4 Skool
Length: 4:00
Notes: Choregraphy only version of their debut single
Watched Status: Previously unwatched
Bias: V
Reason: You sat on his head and shot him. You invoked all of my sympathies.
Favorite video to date: (I already hate myself for including this.) I… don’t know. On the one hand, bus. On the other hand, JHope and me looking like an idiot. So I guess the dance practice with the Fukk shirt and knee pads?

Back to our special sub-feature. I missed it, didn’t you? This time it’s less about Korean culture and more about fandom in general.

*Anti: Anti-fans are exactly what they sound like. But worse. People who are avidly against something. Be it an entire fandom, a band, a member of a band. And while it’s totally normal not to like something, rabid anti’s take things to another level. Occasionally a dangerous level. Just, please, remember to be nice to people. But not Black Magic School Buses. Fuck those assholes. (back)

but at least this time I have another video to share!

(and if I had a bias for that video, it’d be JHope’s kneepads.)

Like what I’m doing here? Consider supporting me on Patreon or by buying me a ko-fi