Fangirl Follow Along: Euphoria: Theme of LOVE YOURSELF Wonder

Okay, it’s not exactly “breaking news” anymore. It’s over a week too late for that. But today, we do have a break from our regularly scheduled Fangirl Follow Along. Today we were supposed to be breaking down DOPE, but instead, on April 5th, our bulletproof boy scouts released a new Japanese album. At the same time, the released a video with the theme of their next album.

And that video? It ties right into the HYYH trilogy.

So instead of DOPE (my all-time favorite BTS video), we’re going to be breaking down “Euphoria: Theme of LOVE YOURSELF Wonder.”

Once again, we start with the BigHit logo and then go right into:

Oh, fuck me, not again. (Honestly, the first time I watched this, curled up in bed while still sick as fuck I thought “OH GOD, NO! I CAN’T DO THIS AGAIN.”)

My actual bias is V scratching his nose.

Or just V in general, I guess. I mean, every breakdown I do it’s all V all the time, so…

(He really is the best actor.) 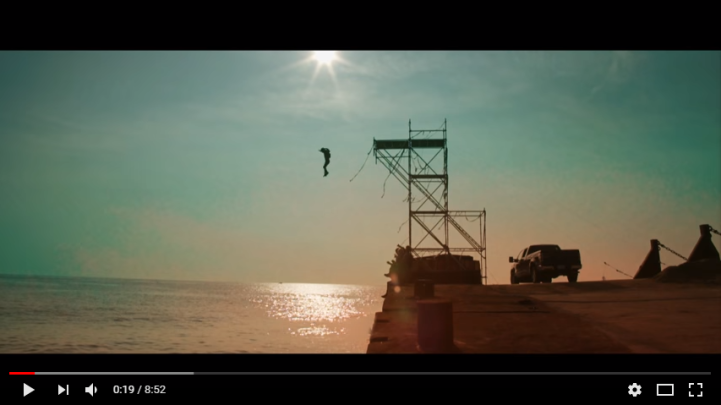 I feel like the “no diving” here should be implied.

This all feels so familiar. Like I died here once before.

I feel like Steve Rogers showing Peggy around Brooklyn.

I got beaten up over there once…

Got beaten up over there once…

Once, over there… I got beaten up.

See, this is why I pre-empted DOPE. 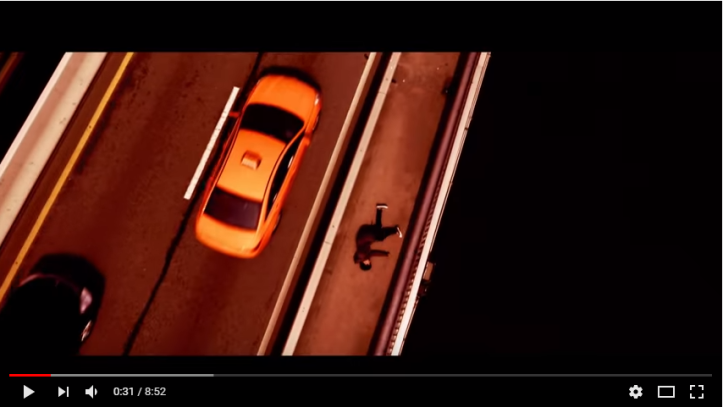 Oh fuck me, I forgot we hadn’t seen J-Hope yet.

Unlike Steve, though, I cannot do this all day so let’s speed through, shall we?

Wait, where have I seen this imagery before?

Oh yeah! That was just as much of a mind fuck… 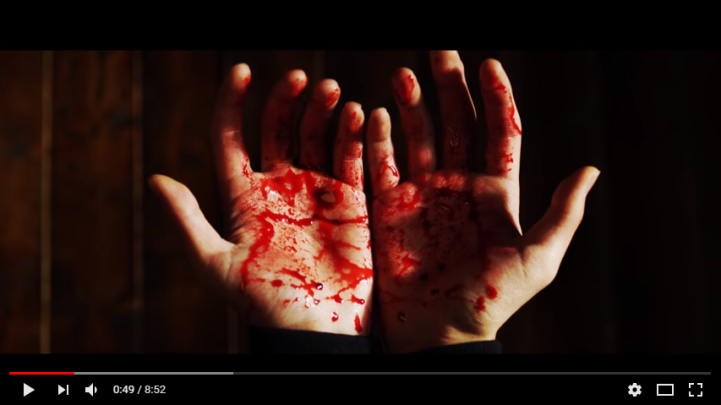 Not actually what blood on hands looks like… don’t ask.

but does transition nicely to flower petals in hands.

OMFG I am such a sucker for sculpted thighs.

Finally, Jin throws open the curtains and we get to new imagery…

But now he’s doing something about it. 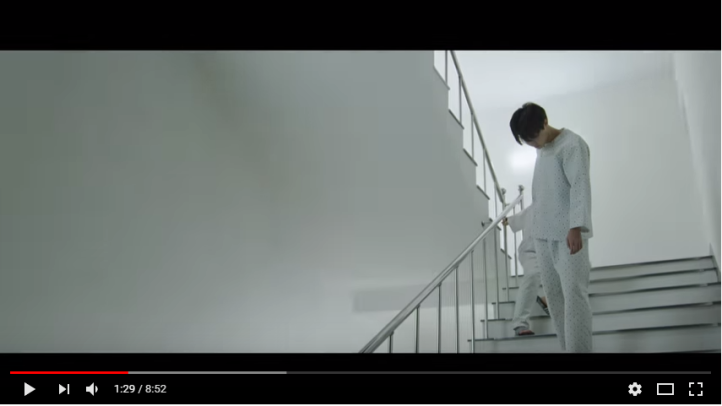 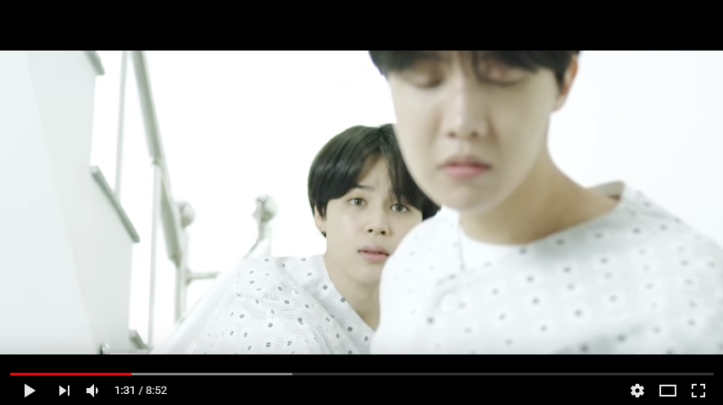 …all the boys have black hair. 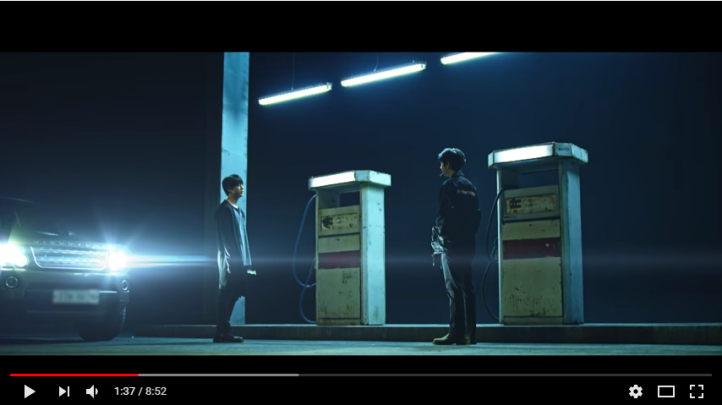 That’s how you can tell it’s new footage. 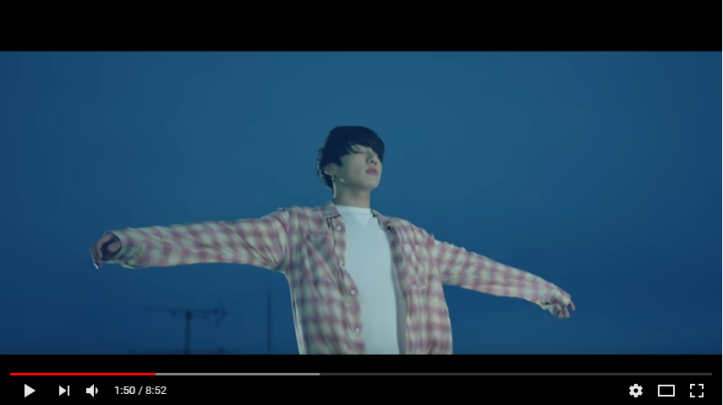 Finally, with one last look at affected!Jin, we can move on…

Or, you know, we could run some more. Because we’re trapped in this trilogy forever. We go to sleep hoping that everything will go back to normal but when we wake up we’re still in the world through the little door with the other mother waiting to sew buttons onto our eyes.

…away, run away baby. Before I put my spell on you… 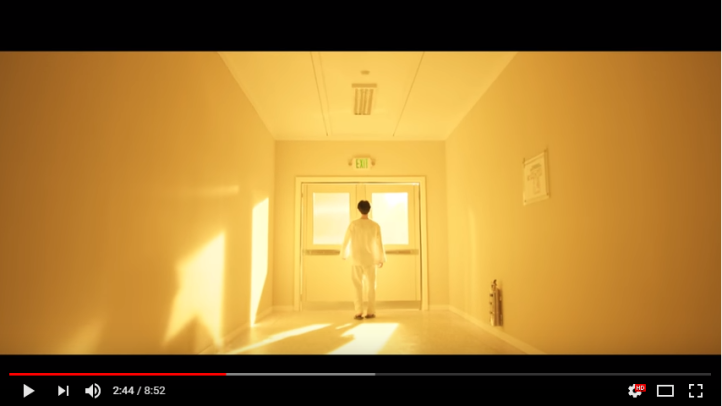 Before they hit the exit and…

…we fade to white.

Told you it was a fucking happy sigh. Three minutes of pure visual assault before we get to the music and one smile is just supposed to make it all better?

I mean, it does, but still… 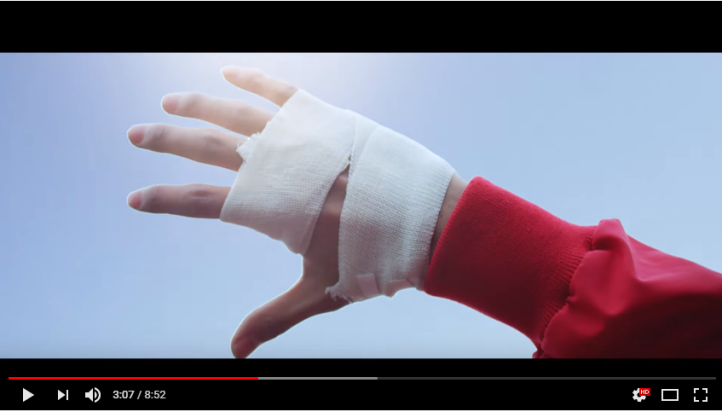 Three minutes to get to Jungkook saying Euphoria once and smiling once and now this? 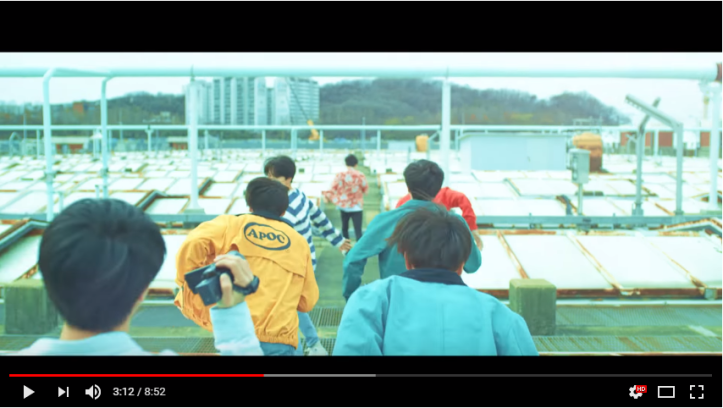 (oh fuck, I still need to get a quote on solar panels #adulting)

Jimin is so pure, it gives me life.

And, okay, the music and grainy video footage are pretty great.

And the boys playing with each other. (Yoongi shoots…

…and they all fall down.)

(well not all, but I was trying to be cute…)

More extreme close-ups with the time not set properly. Because let’s be honest, every home video recorded pre-cellphone has the wrong timestamp.

I love the grumpy old man…

…who isn’t actually grumpy. (Or old, but whatevs.)

Something gets their attention… 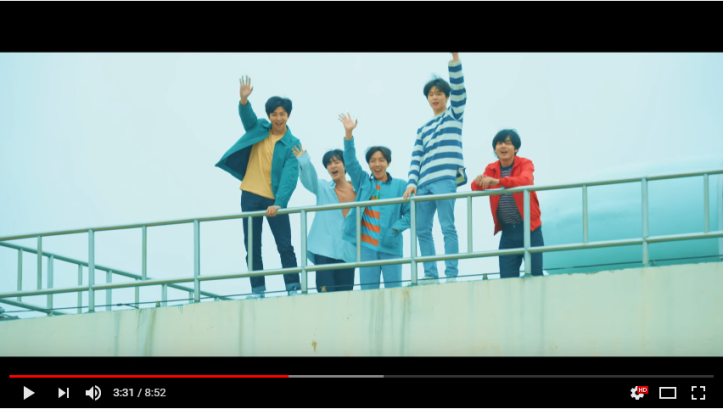 …and it’s all their friends.

We cut back and forth between Jungkook walking and stills. 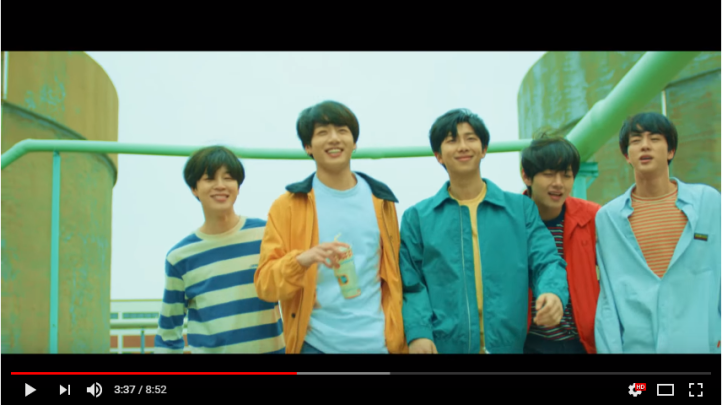 His friends joining him as the video proceeds.

And, honestly, I wish I could capture all the stills because they’re amazing. If I had to only get one, though, I’m glad it was this one. 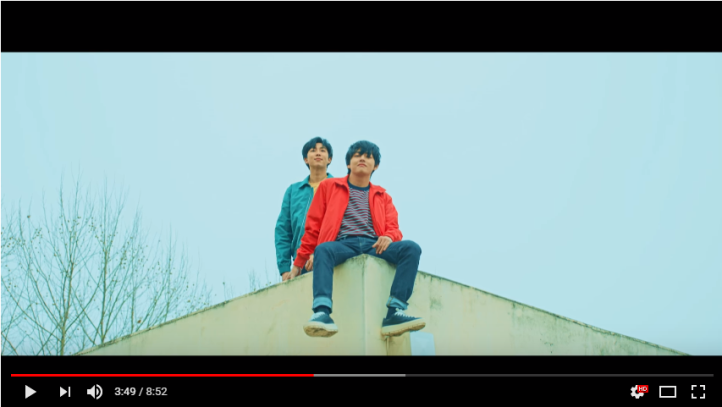 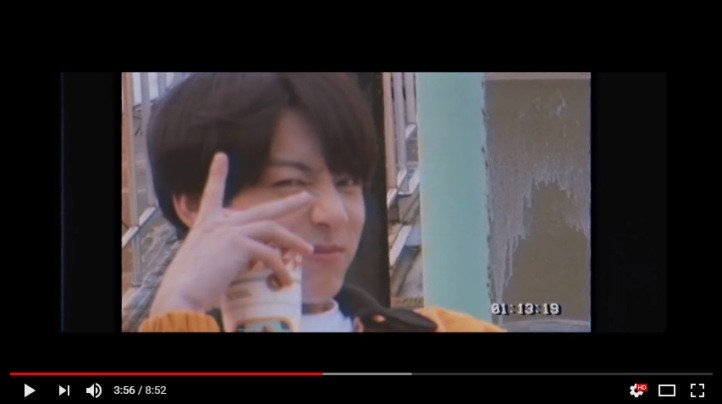 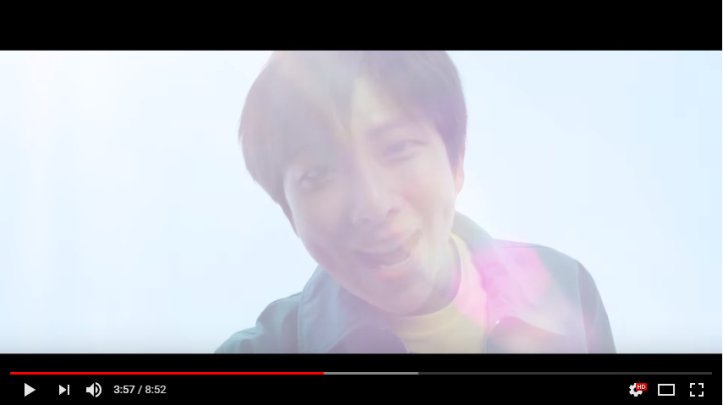 (not feeling RM with black hair in this style…) 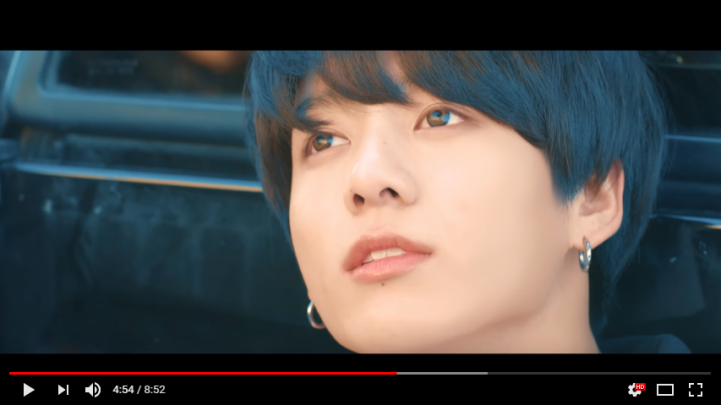 My god, this shot. Take a moment to bask in it before we return to HYYH trilogy Neverland imagery.

But at least our lost boys are happy.

As they break the forth wall.

And we’re back at the pier. I honestly might dismantle this if I ever make it to South Korea. Especially since Euphoria is over and we’re back to the mood music which can only mean–

Yoongi is in a full on old man outfit.

Bury me in white. Pants. And a white cardigan. Because I’m a grandpa. 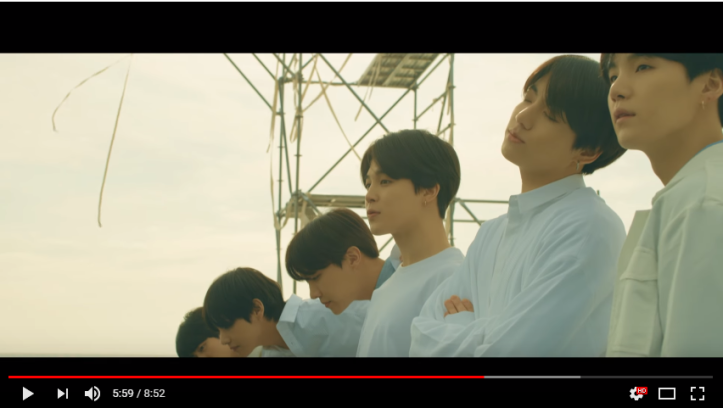 So many pretty pretties…

Don’t even think about it, V. I will fucking sit on you. Hand to god.

Oh come the fuck on! It’s like herding cats. Or trying to keep a raid from standing in the fucking fire.

V is clearly not amused that Jin is taking his thing.

I am clearly not amused that V managed to stay on the ground while Jin scaled the rickety scaffolding.

Bullshit was that footage in HD…

This is the quality of video from when I was a kid in the late 80s, early 90s. 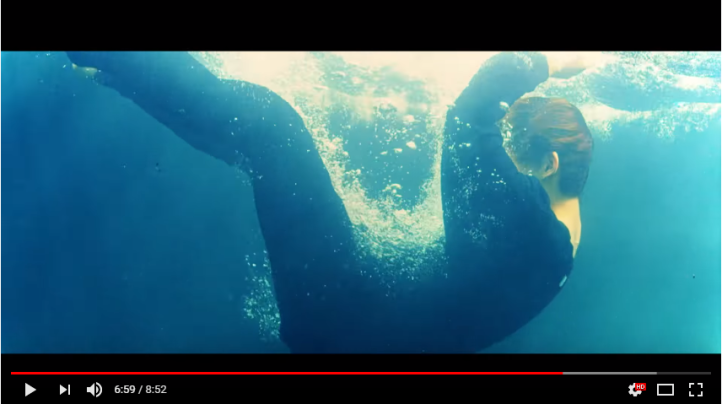 Are you kidding me? V wasn’t even up there. Or wearing that.

Is any of this for real, or not?

Big Hit thinks Jin’s pillow lips will make up for this kind of emotional whiplash.

And then credits and we’re done.

So now you can see why I couldn’t go on to DOPE this week. This was HYYH, and I’m still stuck in HYYH. It’s just, all of it. All at once. And I still don’t even know if this imagery is more positive, or if it’s just the phrase Euphoria in the title making me think it’s more positive.

All I know is that Euphoria feels plus HYYH feels plus my current emotional state equals BIG FEELS.

Even if I cannot identify those big feels…

(okay, I watched until the end of the credits and the last scene was from I NEED U and now I know the feels are pain. Big heartbreak pain.)

Join me next time when we watch… *wait for it* DOPE.

(for real this time though.)

Like what I’m doing here, consider supporting me on Patreon or buying me a ko-fi.